We are absolutely thrilled to have RITA award-winning historical author Sophia Nash dishing with us today! Before becoming a multi award-winning author, Sophia was an award-winning Producer/Writer for PM Magazine and the CBS/WTVJ-Miami news division, a congressional speech writer, Press Secretary and later a congressional liaison for the United States Information Agency, and the Executive Director of the non-profit Washington International Horse Show for almost a decade. Wow! Sophia has led a very interesting life! Her latest release, Secrets of a Scandalous Bride, has received star reviews from Booklist and Library Journal, and as you can tell by my review here, I loved it! Welcome Sophia to The Romance Dish! 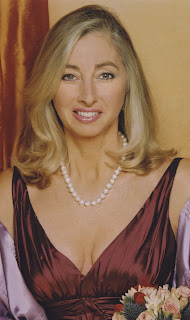 It’s a great honor to join all my longtime friends here on their terrific, new blog spot. Andrea, PJ, Gannon, and Buffie, I love The Romance Dish! Thank you for letting me out of my snow covered writer’s cave to talk about Fantasy Cooking.

Ok, I hear the snickers already. Anyone who has ever spent more than five minutes around me knows how much I love to cook – NOT! Several of you are probably remembering how my oven is the home of my cookbooks, all gifts from well meaning family & friends. I’ve already donned my defensive apron to explain my position. There’s just something about the endless routine of throwing down three meals a day that sucks the pleasure right out of haut cuisine. And I’m completely mystified by the popularity of the ever growing torrent of cooking shows, magazines, etc. these days. I mean, really, who has the time to shop, and lovingly cook an endless round of meals? And if you suggest Rachel Ray’s 30 minute meals (which really take 60 minutes), well . . . let’s just say that the sound of her saying EEVOO or EEVO or whatever she says in front of her trash bowl sends me to the edge of darkness.

This is why I loved Sandra Bullocks’ performance in The Blind Side. You know, the one where she bought an entire Thanksgiving dinner and put it on the counter with a stack of dishes? If I didn’t have my French mother come to stay during the holidays, this would be me. Instead, I slave just like the rest of sainted motherhood to crank out a sautéed, basted, baked, broiled, frapped sideboard worth of food that makes my exercise teacher clap her hands in glee due to the number of weeks it will take to get me back into shape. But this is only twice a year. The rest of the time, I serve raw fruits and veggies, nuts, whole grain bread & cereal, and fast-on-the-grill foods. Compliments are nonexistent; even the dog is unimpressed. 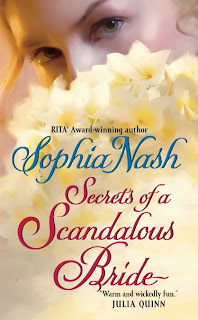 So what is Fantasy Cooking? This is when you create a heroine who loves to cook. She’s a brilliant chef. She can cook Rachel’s EEVVOO meals in TEN minutes using the contents of a poorly stocked Regency-era kitchen to feed thirty hungry men three bloody times a day while wearing a blissful smile. Of course everybody loves her. They swoon at her feet, gushing praise over her edible masterpieces. I had so much fun creating Elizabeth Ashburton in Secrets of a Scandalous Bride, my Feb 23rd release, which is the grand finale in the widows club series. She is everything I am not and never will be and therein lies the fantasy. Can you imagine who I paired her with in the story?

Rowland Manning, an enigmatic hero who hates to eat, that’s who. They are delicious together in a cat vs. dog kind of way!

I do hope you enjoy this newest confection… Now let’s hear about your fantasy role in life. If you could play any role, what would it be? A ballerina, a singer, high powered Wall Street player, Olympic athlete, brain surgeon, astronaut…name it and tell us why!

Sophia has graciously offered three lucky commenters their choice of one of her backlist titles!
Posted by Andrea at 12:08 AM