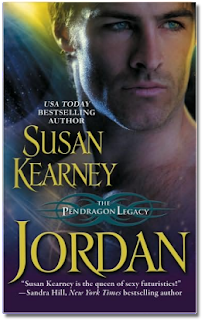 The search for the Holy Grail continues as ancient Tribes prepare to invade Earth in their quest to rule the universe in the final book of Kearney’s futuristic trilogy based on Arthurian legend.

Vivianne Blackstone, owner of the Vesta Corporation, is a self-made billionaire whose company is building the Draco, an advanced one-of-a-kind spaceship that, hopefully, will aid Earth in the search for the Holy Grail. The project is coming along nicely under the direction of Jordan McArthur, Vesta’s brilliant but mysterious chief engineer but, fearful of Tribe spies, Vivianna has had Jordan investigated and is stunned to discover that his entire resume is a pack of lies. The future of Earth is riding on the success of this project and she refuses to let it remain in the hands of a man who could be a traitor, no matter how sexy or brilliant he may be.

Jordan McArthur may not have graduated from Harvard or any of the other schools on his resume but he’s no spy. Born on a distant planet more than 1500 years ago, Jordan has good reason to want the Draco to succeed. In fact, it's his destiny to make sure it happens.  So, when confronted by Vivianne, he does the only thing he can think of to save Earth: using the magical energy source of his ancient staff, he launches the Draco into space ahead of schedule. Now, a not-quite-ready spaceship, with an untrained skeleton crew, a suspicious, angry Vivianne and a determined Jordan must search the universe for the ancient cup that is the only hope for Earth’s survival.

I’ve enjoyed this series immensely but JORDAN is my favorite of the three books.  Jordan and Vivianna are vibrant, complex people, so vividly drawn by Kearney that they leaped from the pages of the book into my heart.  I quickly became emotionally invested in them and the outcome of their journey.  The passion between them is electrifying and I have to admit that, after reading a certain scene, I'll never be able to view the loss of gravity in quite the same way but, for me, what really makes their relationship soar is the love, respect and deep, sensual, emotional connection that develops between these two highly intelligent, fiercely independent people.

Kearney's talent for creating alien worlds that come to life through her vivid descriptions has grown with each of her books.  She makes you believe in the possibility of people and places far across the galaxy and in her inter-galactic tale of  King Arthur and the Knights of the Round Table.   I especially enjoyed her take on the relationship between Arthur, Guinevere and Lancelot.  All of the questions from the first two books are answered in this thrilling, action-packed, supremely sensual tale from the superbly talented Susan Kearney.

While each of the books in the trilogy will stand alone, I highly recommend reading them in order.  You can check out my reviews of the first two books by clicking here for LUCAN and here for RION.