Lessons in French Cooking at the Romance Dish! 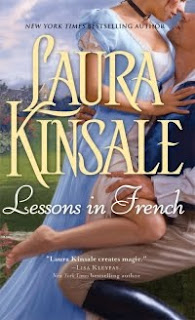 The Romance World has been abuzz with the release of the latest Laura Kinsale LESSONS IN FRENCH.

This is a delicious concoction wih the frothy lightness of a perfect soufflee and the rich, heady depths of the finest cognac. Yeah, I know, more cooking imagery - but this blog IS the Romance Dish! Where else do I get to make jokes about the villain in a book being a crepe?

Laura is one of the most beloved writers in the genre so it's my great privilege today to talk to her about LESSONS IN FRENCH. And make sure you comment - we have TWO signed copies of this mouthwatering book to serve up to people today.

For more information on Laura and her books, please check out her website: www.laurakinsale.com

For a great discussion of one of Laura's older books (and a classic!), please check out the review I did here last week for THE PRINCE OF MIDNIGHT. Some great to and fro in the comments!

Laura, huge congratulations on your latest release LESSONS IN FRENCH which I devoured in one sitting. Can you tell us about this story and the inspiration behind it? 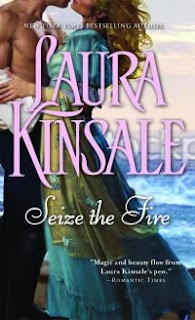 What if the hottest, sweetest, wildest boy in school was your personal tutor for French class? That's how Callie and Trev first met, but instead of high school it was the English countryside; Callie was the wealthy daughter of the local earl, and Trev--in spite of his aristocratic lineage--was from a penniless French family that had barely escaped the guillotine. But Trev and Callie shared more than just language lessons, and when her father caught them together in a carriage...well, that was the last Callie ever saw of Trevelyan d'Augustin. Until nine years later. Callie has been left standing at the altar three different times. She's resigned herself to spinsterhood, and her greatest desire is to win the silver cup with her prize bull, Hubert. When Trev reappears, her quiet spinster life turns upside down. The enormous Hubert vanishes into thin air, one of her former jilts comes back to woo her in a most determined manner—and her bull takes the town by storm! In the midst of these misadventures, Callie finds herself falling in love again with the worst possible man for her. 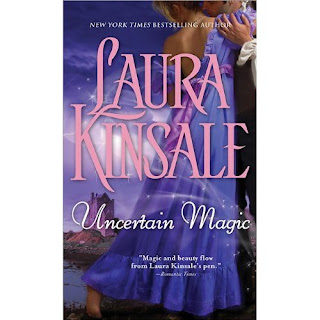 I've been saying that this book was written in tribute to all the enjoyment I've had reading Georgette Heyer's Regencies over the years. That's true, but as people have begun talking about LESSONS IN FRENCH, I've realized that it has some other roots too. I'm thinking of all those wonderful romantic movies, such as SHAKESPEARE IN LOVE where there is romping comedy but also a deep emotional undercurrent.

You’re famous and much beloved for writing complex, heart-wrenching romance yet LESSONS IN FRENCH, while it definitely has a huge emotional punch, is much lighter in tone than your earlier work. I found myself laughing out loud at the antics of the various characters and the witty banter. Is this an area you’ve wanted to explore for a while and will we see more comedy from you? 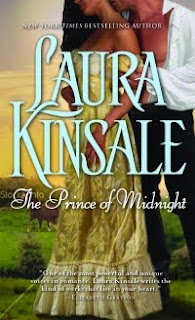 Even though most of the books I've written have been very intense, and some quite dark, there is usually some humor in there. I think perhaps the older I get, the more amusement I get out of life. Which is a nice trend, isn't it? I think the best romantic comedy has some heart-tugging in it. I don't plan far ahead (tomorrow is a long time for me), so I can't say what I'll do in the future. I still enjoy torturing characters!

Definitely a nice trend! Your books are regularly mentioned among the greatest romances ever written (you certainly feature on my personal list!). How has this affected you? Do you feel that weight of expectation when you sit down to write a book?

Writing really only works for me when it's divorced from the "real world." I love it when people enjoy my books--who wouldn't? But when I am writing, the less I think about that sort of thing, the better. It's just me and the characters.

You have an astonishingly individual voice that is completely inimitable. For all that, I’d love to know what writers have influenced you. The writers that have influenced me are John Fowles (THE FRENCH LIEUTENANT'S WOMAN), C.J. Cherryh, James Joyce and Charles Dickens. As you can tell, all of them are word and character junkies. Unlike, say, my least favorite writer, Hemingway. I'm not a big fan of the "he said, she said," stripped down version of literature.

Thanks, Laura, for a great interview and for being our guest today on the Romance Dish. Do you have anything you'd like to ask our readers?

Thank you for having me on the Romance Dish. I'd love to hear which books and movies both tugged at your readers' heartstrings and made them laugh. I'm ready to go out and buy some!

So, guys, get commenting! TWO lucky people will win signed copies of LESSONS IN FRENCH! Good luck!
Posted by Anna Campbell at 12:05 AM