Review - - Too Wicked To Kiss 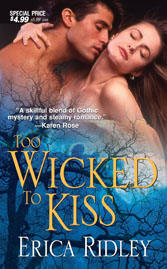 I cut my romance reading teeth on books by Victoria Holt and Mary Stewart so, as you might imagine, I have a fondness for gothic historicals set in spooky manors rife with scandalous secrets and hidden passageways, murder mysteries and dark, brooding heroes who unintentionally place the heroine in grave danger then rescue her in the nick of time.  There aren’t that many gothics being published these days so it’s a special treat when I find one, especially one as well-written as Erica Ridley’s debut, Too Wicked to Kiss.

Because of the visions she sees whenever she touches another person, and the debilitating headaches they cause, Evangeline Pemberton has led a lonely life of isolation and pain. Abused by her controlling stepfather, the only love and affection she has ever known has been from her beloved mother, a woman who also has visions. When her mother dies, Evangeline escapes to London and throws herself upon the mercy of Lady Stanton, her mother’s childhood friend, only to discover that she may have jumped from the frying pan into the fire. Lady Stanton’s daughter, Susan, having been publicly disgraced, is in need of a husband and the Stantons have set their sights on reclusive Gavin Lioncroft, expecting Evangeline to help them trap him into marriage with Susan. True, there’s the nasty business of him reportedly having killed his parents but they’re willing to overlook that detail to secure his riches. Evangeline wants no part of their scheme, especially after her first encounter with the man.

Not because of the obsidian eyes framed by equally black lashes. Nor because of the angry slash of cheekbones, the flash of bared teeth, or the scar just above the edge of his jaw. Those things, though separately terrible, together formed a face of cold, cruel beauty. A face for statues, for frescoes, for-

Another flutter of orange light as he reached the final stair, and Evangeline could no longer breathe.

He was angry. Horribly angry. Livid. Enraged. Furious. His eyes glittered like a wolf’s because he was a wolf, a beautiful powerful violent wolf, prowling toward his unsuspecting prey. His dark hair slid across his face, snapping Evangeline from her trance just as his long, gloveless hand fell atop the countess’s shoulder.

Shunned by the ton and his own family for causing the deaths of his parents, Gavin Lioncroft leads an isolated life at his country home, Blackberry Manor. Haunted by the deaths of his parents and his role in their demise, he’s a tortured, angry man, paying a dreadful price for a youthful mistake. He’s shocked, but hopeful, when his estranged sister arrives on his doorstep with her family but furious when strangers start arriving at his home and he discovers that his sister has arranged a house party without his knowledge. He wants no part of these people, with the possible exception of Miss Pemberton. The attraction between them sizzles and Gavin has no intention of ignoring it.

He had not failed to notice Evangeline’s proximity, if the sudden heat darkening his eyes was any indication. His gaze slid down her body like warm oil over bare skin, gliding past her unruly mane, to the helpless widening of her eyes, to the erratic pulsing in her throat, to the odd constriction in her bodice, to the flowing silk of her borrowed gown, to the tips of her slippered feet.

And then his gaze retraced its path back up, just as slowly.

For all his alpha tendencies, Gavin is surprisingly tender with the reluctant Evangeline but just when she begins to trust him and it seems as if they may have a chance to claim the happiness that has been missing from their lives, someone is murdered and suspicion once again lands directly on Gavin.

Ms. Ridley has written a deliciously sensual gothic romance with realistic characters that tug at the heartstrings, a murder mystery that kept me guessing, and a tortured hero who is rescued from his emotional prison by an unlikely heroine and who then rescues her in return. The fast-paced story flows smoothly and held my attention throughout. In fact, I stayed up late into the night, eagerly flipping pages until I reached the end.

Erica Ridley is a bright new talent to watch.  I can't wait to see what she has in store for us next!