Review - Lessons From A Scarlet Lady 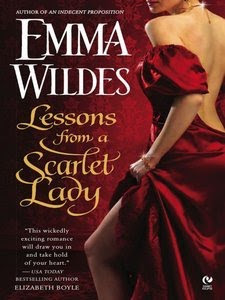 Brianna Northfield has only been married three months to her husband, Colton, the Duke of Rolthven. Young, beautiful, and decorous, she is the perfect wife, and is, for the most part, happily married. But Brianna knows that married men of the aristocracy eventually take a mistress, and that is not something she wishes to contemplate in her own marriage. In order to assure that Colton is pleased in every area of their marriage, Brianna reads the scandalous book, Lady Rothburg's Advice--a lascivious volume of lessons from a courtesan. Putting the advice of Lady Rothburg to work, Brianna begins a campaign of seduction that will have her husband wondering where this beautiful temptress came from.

Colton is the epitome of a duke: serious, responsible and very proper. He has been attracted to Brianna from the first time they met, and he is pleased that she is is the perfect duchess: lovely, polite and well-bred. That all changes when she wears a very revealing gown at the opera one night. While Colton enjoys seeing Brianna's decolletage in private, he has no desire to have every man in sight ogling her breasts. Unbeknownst to him, his innocent young wife is out to seduce him and shake up his oh-so-serious demeanor. Colton is suddenly ruled by his desire for his gorgeous wife and shows her just how much in the carriage on the way home from the opera. Score one for Brianna!

Brianna is delighted that her seduction is a success. Colton can't keep his hands off of her, and although he's surprised by her very inventive tricks, he responds just as she hoped he would. Hopelessly in love with her husband, Brianna hopes that his desire for her will lead to his loving her. But Colton begins to have uncomfortable suspicions; where did Brianna learn such things? Since he never taught her, did she learn them from another man?

Lessons From A Scarlet Lady is refreshingly different from most other historicals in that the hero and heroine are already married, but that doesn't stop Brianna from working for her ultimate happily ever after. It was entertaining to watch Colton fall helplessly under his wife's spell, to be the one who is seduced rather than the seducer. And to ultimately fall in love. Lady Rothburg says it best:

To men, love represents vulnerability. When a man becomes emotionally attached to a woman, she wields a great deal of influence in his life. You must understand that this frightens most of them, whether they admit it or not. Of course, their fear varies in degrees from one male to another. They embrace passion, but they tread around love most carefully. It is a glorious gift when a man gives you both.

Each chapter begins with a little snippet of Lady Rothburg's, which was very entertaining. Another bonus is the secondary love story between Robert, Colton's rakehell youngest brother and Rebecca, Brianna's close friend. I'll just say that Lady Rothburg was a great help to Rebecca as well. *g*

If you're looking for an enjoyable, curl-up-by-the-fire book, take a few Lessons From A Scarlet Lady. You never know what you may learn!