Review -- Secrets of a Scandalous Bride 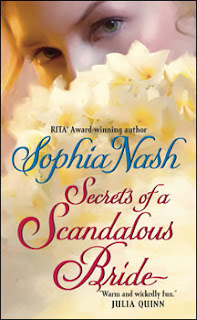 Sophia Nash is one of my “go to” authors. When I pick up one of her books, I know I can count on an engaging story filled with wit, tender emotion, and characters that I fall in love with. Secrets of a Scandalous Bride is all that and more. It is the last of her popular Widows Club series (though it stands on its own) and wraps everything up splendidly.

This one picks up right after the previous book (Love with the Perfect Scoundrel) leaves off with the wedding of Grace and Michael. Elizabeth Ashburton and the other members of the Dowager Duchess of Helston’s Widows Club are there standing up for Grace as she’s being led down the aisle on the arm of her brother-in-law, Rowland Manning, the bad boy villain of said previous book. But Elizabeth isn’t concerned with that – she’s worried that her past is about to catch up to her. For the past two years, she’s been living a lie posing as a widow to hide from an obsessive suitor whom she believes killed her army captain father and his friend at Badajoz. That suitor is now a decorated general and war hero, and about to have a duchy bestowed upon him by the Prince Regent. Who would believe her word over his? Upon spying General Pymm enter the church, Elizabeth bolts and hides in a carriage. Unbeknownst to her, it happens to be the carriage of Rowland Manning.

Ah . . . the juicy widowed morsel from the church—the one with the bountiful hair and the magnificent glittering emerald eyes. He narrowed his gaze. “Really? And what’s in it for me?”

She was doing a fairly good job of hiding her panic. Only her uneven breathing gave her away. “Everything I have if you will not betray me to those soldiers.”

“Everything? Hmmm, my favorite word.”

Rowland Manning may be one of London’s most popular horse traders, but he worked hard to achieve that status. As the bastard son of the previous Earl of Wallace, he wasn’t afforded the same luxuries as his brother growing up. He was born in the rookery and spent his childhood struggling to survive. Now that he’s built his empire, he’ll not let anything destroy it – especially not a widow with secrets.

Rowland is a tortured soul, but he’s not completely innocent – he’s done some grave injustices that haven’t helped him. He’s jaded and cynical with everyone he meets, but at least he’s consistent. That is until he meets Elizabeth and she starts to crack the ice he’s built around his heart. She is the perfect heroine for him because she is strong-willed and isn’t afraid of him. He may be intimidating, but she doesn’t back down. Having spent a good part of her life surrounded by military men, she handles herself well and he realizes that early on.

He had to give her credit. She was one of the few—no, the only women—who had the nerve to talk to him thusly. Most were afraid of him, or the reverse; interested only in all manner of sexual perversion. He suddenly grinned, unused to the feeling of his mouth stretching into a smile.

Rowland doesn’t trust anyone, so he and Elizabeth engage in the ultimate battle of wills and wits. He has always been a loner, never depended on anyone, and denies himself so much – every pleasure and happiness life has to offer. My heart went out to him! Even though he knows he’s not good enough for Elizabeth (his words, not mine), he goes after her because he’s smart enough to realize a good thing when he sees it. As he puts it, Elizabeth saves him from himself.