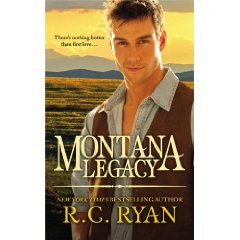 They're the McCords...three rugged, sexy cowboy cousins who'll inherit the family range--if they seek the treasure hidden on it. But even more precious are the women who can tame their wild hearts...


As young boys, Jesse McCord and his cousins, Wyatt and Zane roamed their grandfather’s Montana ranch in search of excitement and the lost gold that consumed their Grandpa Coot’s life. None of them could imagine living anywhere else, but Coot’s obsession with finding the gold drove two of his son’s from the ranch, leaving only orphaned Jesse to live and work alongside his beloved grandpa. Now, Jesse is reeling from Coot’s sudden death, the return of the two cousins he hasn’t seen since they left the ranch with their parents all those years ago and what he views as a betrayal by the one man he thought he knew better than anyone.  He's an angry, emotionally battered man, left wondering what fate has in store for him next when, at Coot’s funeral, he looks up and his gaze collides with Amy Parrish: his high school sweetheart, daughter of the McCord’s sworn enemy, the only woman he’s ever loved, the one who, years earlier, left Montana, and him, without even a good-bye.

Just watching her, he felt all the old memories rushing over him, filling his mind, battering his soul. Memories he’d kept locked up for years in a small, secret corner of his mind. The way her hair smelled in the rain. The way her eyes sparkled whenever she smiled. The sound of her laughter, low in her throat. The way she felt in his arms when they kissed. When they made love…

He’d be damned if he’d put himself through that hell again.

Amy Parrish has returned home for one reason: to care for her ailing father – a bitter, argumentative man who has never shown her one ounce of love or affection. She has no intention of starting anything with Jesse McCord, not after the way he abandoned her when she left for college. But fate has other plans and, as Amy and Jesse soon discover, what each of them thought was the truth about that long-ago summer may have been something else entirely. And, when mysterious accidents begin occurring with Amy as the target, they are forced to acknowledge the depth of their feelings for one another.

A family torn apart, a couple given a second chance at love, a search for lost treasure and someone willing to kill to claim it for their own are at the heart of this satisfying contemporary western romance.