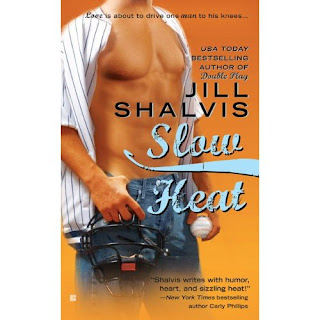 As the publicist for Santa Barbara’s expansion team, the Heat, Samantha McNead is used to smoothing out issues and problems concerning the team’s players. So when an obsessive fan claims to be pregnant with star catcher Wade O’Riley’s baby, Sam steps in, like always, to do what she must. Only this time she is asked to pretend to be Wade’s girlfriend for a month in order to restore his public image. Despite the fact that she secretly has the hots for Wade, Sam is determined to get through the month unscathed. And Wade is determined to bring up their past night of explosive passion in an elevator at every turn. When their make-believe weekend at a high profile wedding results in another night of fiery passion, each is more confused than ever. And if that wasn’t enough, Sam’s self-centered brother goes into rehab and asks her to take care of something for him. That “something” turns out to be her ten year old nephew, Tag.

Wade O’Riley may be the best defensive catcher in Major League Baseball, but his life wasn’t always so grand. Growing up poor with an indifferent, alcoholic father took a toll on a young, impressionable Wade. This caused him to want to make something of himself. And he did, in a big way. But with fortune comes fame . . . and the crazy people who want to take advantage of that. Wade knows he is innocent, but is glad that Sam is helping him with the situation because he has not forgotten their one night together, despite what Sam may think. And even though he has a hard time with commitment (after all, he’d been let down by it before), he’d like to see where this thing with Sam leads.

I completely adore Sam and Wade! These two are dynamite opposite each other. I love a good romance where the hero and heroine are adversaries and the tension between them is super intense. Right from the start they are at each other:

“Are you okay after last night’s game?” she asked.

“Always. How about you, Princess?”

She’d asked him a million times not to call her that. It drove her crazy, which was of course why he did it. “I’m fine. We need to talk.”

This exchange between Wade and his best friend Pace (the hero from Double Play) concerning the “pretend” relationship had me laughing:

“You mean the wedding.”

“That, too,” Pace said with an obvious smirk.

“I’m sorry, exactly how is this so funny?”

“Well, you’ve never met a woman you couldn’t conquer, and she’s sure as hell never met a guy whose balls she couldn’t crush. So who’s going to survive? That’s the million-dollar question.”

Wade is pegged as a carefree ladies’ man, and Sam as an “all work and no play” kind of gal. Of course, those are personas that they show the public, but aren’t who they really are or want to be deep down inside. Spending a month together “pretending” to date allows them to realize that and so much more about the other. Plus, Tag was a big part of that as well. He totally made several scenes and a couple in particular between him and Wade melted my heart! As did a very sweet part involving Sam and Wade playing the game Truth or Dare. Sigh.

Slow Heat may be about baseball, but you certainly don’t have to be a sports fan to enjoy it. If you like reading fun, sexy contemporaries, then this one fits the bill quite nicely. Pick it up and enjoy the game!