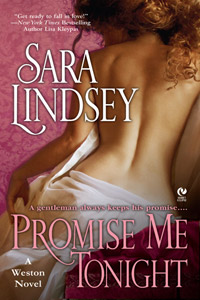 At the tender age of six, Isabella Weston announced her intention to marry James Sheffield in a letter to her mother.  At the age of 14, she secured a promise from James to dance with her at her come-out ball and on the night of her ball she declared her love and sent James - the boy next door, her older brother's best friend and the love of her life - fleeing to Ireland.

After the tragic deaths of his parents and infant sister, ten-year-old James Sheffield swore he would never open his heart to the pain of love again. Shipped off to England to live with his grandfather, the cold, heartless Earl of Dunstan, James spent his childhood being told over and over that he was a disappointment and unworthy of being loved.  The only affection he ever received, the only people he considered family were the Westons next door to his grandfather's estate. As close to his best friend, Henry Weston, as a brother, he would never do anything to betray his friendship or his trust - and that includes lusting after Henry's little sister. But a fully grown, exquisitely beautiful, Isabella Weston is a force of nature and when James is called home following his grandfather's death, Isabella takes matters into her own hands.

Promise Me Tonight is the first book in Sara Lindsey's Weston family series, focusing on the lives and loves of the seven irrepressible Weston siblings. The writing is passionate, funny and endearing - evoking laughter, tears, sighs and the desire for many more stories from the talented Ms. Lindsey. Her dialogue is, by turns, sparkling, amusing and heartfelt - as in this passage when 20-year-old James comforts a young Isabella.

The small smile she gave him made James feel like the king of England - utterly grand and slightly mad. As James stared into her watery eyes, for a moment, it seemed as if he saw his soul gazing back at him; the thought terrified him, and he pulled his hands away as if burned.

Or, in this passage when Isabella's mother attempts to delicately question her daughter about whether she and James have done more than kiss.

"Oh!" Izzie's eyes grew wide with sudden comprehension. "You wanted to know if James and I were like Venus and Mars."
"I beg your pardon," her mother said. "Did you say Venus and Mars?"
Isabella nodded. "Yes, like the pictures in the book I found in - well, it's not important where I found it, and I only looked at it because I thought it was so odd to find a religious tract in...the place where I found it. Which is not important," she said again for good measure.
"I am afraid you've lost me. A religious tract?"
"That's just it!" Izzie waved her hands in frustration. "It wasn't religious at all, but the title was so misleading. Godly Love, I think it was called."
"Ah." Lady Weston nodded. "I believe I begin to understand. I can also imagine where you found it or, rather, whose possession it was in. I presume it has moved along with its owner to his bachelor lodgings so as not to corrupt any of my other children. Well, my other children aside from Olivia," she clarified, "since I can't imagine you kept such a find to yourself."
Isabella's blush proclaimed her guilt.
"Now back to the subject at hand - I trust you and James were not like" - Lady Weston swallowed hard - "Venus and Mars."
"Oh no!" Izzie exclaimed with horror.
Her mother breathed a huge sigh of relief. "Thank God!"
"It was more like Juno and Jupiter."
Lady Weston buried her face in her hands and made a choking sound. Isabella couldn't tell if she was laughing or crying. Maybe both.

I adore the Westons!  The feelings I had when I turned the final page of Promise Me Tonight were not unlike those that I felt upon finishing The Duke and I, the first book in Julia Quinn's Bridgerton series:  the pleasure of reading an emotional and heartwarming love story, the excitement of discovering a new and talented author and the anticipation of many years of books, telling the stories of family members that I'm eager to know better.

With the publication of Promise Me Tonight, Sara Lindsey joins a cadre of 2009-2010 debut authors who have proven, through the quality of their writing, that the future of historical romance fiction is, indeed, in very capable and talented hands.