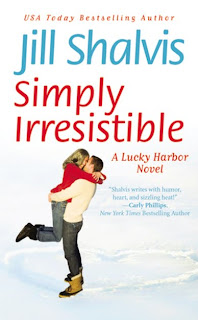 After dumping her abusive boyfriend and then getting fired from her job, Maddie Moore leaves the chaos of Los Angeles to join her two estranged half sisters at the place left to them by their late mother, Lucky Harbor Resort, located in the small coastal town of Lucky Harbor, Washington. Maddie wants a brand new start and believes that a new place and a new job, running the inn with her sisters, will do just that. Except that when she gets there, her hopes are dashed after her sisters inform her that they have no intention of staying, especially after seeing how rundown the inn is. Maddie calls a contractor to get an estimate for repairs and he just so happens to be the same Hot Biker that 1) Maddie almost ran off the road upon arriving to Lucky Harbor and 2) whose motorcycle she knocked over at the town’s bar later that night. As someone who has sworn off men and is totally clumsy, Maddie wonders why the sexy Jax has any interest in her.

Jax Cullen left his career as a successful Seattle attorney five years ago because he wasn’t happy and began to not like himself anymore. He felt like the job had sucked his very soul right out of him. So, he returned to his hometown of Lucky Harbor to do what he loves: building and working with his hands. When he meets the quirky Maddie, she touches something deep inside him. Something he hasn’t felt in a very long time.

But he was still working on recovering his soul.

Just being back in Lucky Harbor helped. It was a slower, simpler lifestyle, one he’d chosen purposely. He’d gone back to his first love, rebuilding and restoration, while trying to help people instead of acquit them.

Until yesterday anyway, when for the first time in far too long, he’d actually felt something real. He’d felt it with shocking depth for a curly-haired, endearingly adorable klutz, a woman with unconscious warmth and an innate sexiness, and a set of sweet, haunted eyes.

Will Maddie allow herself to abandon her oath on giving up men and give Jax a chance to show her how good life can be in Lucky Harbor?

Books like Simply Irresistible are the reason why I love contemporary romance! Ms. Shalvis creates real people who aren’t perfect and carry plenty of emotional baggage that readers will love because of their flaws, not in spite of them. I absolutely adore both Maddie and Jax. I felt an instant connection with Maddie as I’m just as clumsy as she is (really, ask anyone) and like Maddie, I do not like my food to touch on my plate. As the middle sister, Maddie is the peacemaker and works really hard at cultivating a relationship with her sisters, who, by the way, are all completely different. And of course, there’s Jax. I love him. Seriously. He is an amazing hero and encompasses my very favorite qualities: he’s sexy, honorable, protective, and intelligent, with a wicked sense of humor.

“Yes.” She pointed to his left perfectly muscled butt cheek. “There.”

He was quiet for a single, stunned beat. She couldn’t blame him, given that they were both covered in dirt from the filthy attic. “Thanks,” he finally said. “It’s important to know where the dirt streaks are.”

“It is,” she agreed, nodding like a bobble head. “Probably you should stain-stick it right away. I have some in my purse.”

“Are you offering to rub it on my ass?” She felt the heat flood her face, and he grinned. “You’re a paradox, Maddie Moore. I like that about you.”

“Is it because I said nothing was happening between us, and then I . . .”

She squeaked in embarrassment and covered her cheeks.

He’s patient with Maddie as she struggles with her feelings and he respects her space. The exchanges between Maddie and Jax heat up the pages and the love scenes sizzle. A small town setting complete with small town gossip, along with the characters of Maddie’s sisters and Jax’s friends (who look as if they’ll be paired up in the future books) add to the wonderfulness that is this book. I felt such a sense of satisfaction after finishing it that Simply Irresistible completely lives up to its name. And it left me wanting the next book. Now. So, I’d say Ms. Shalvis did her job well. Very well, indeed.